The week in the Villa & Second trip to Palenque Ruins 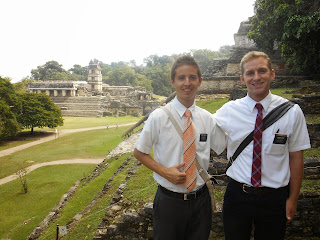 Terribly sorry about last week! We had a rough trip to and from Palenque so we didnt end up getting back until later and had no time to go and write the family. So i apologize about that. But im here this week so esta bien.
Okay well this week, other than palenque wasnt much of a huge change. We found an investigator named Teresa that is about 60 years old. She used to be a Jehovas Witness... HAHA. Anyways, we taught her and managed to get her to commit to baptism! The bad news is, we are leaving next week and she has to go to church 5 times before she can be baptized... so we arent really too happy about it. She is golden and accepts everything we are telling her, but not just because we are telling her it... she really prayed to know if the BoM was true and if Joseph Smith was a prophet. Shes a golden investigator and I really hope to hear when she gets baptized. Shes awesome and super sweet.
So yes, Elder Gray, Stoddard, Espinoza, Grass, and I all went to palenque last week. I was the only one who had already been and a lot of them are over 15 months in the mission... HAHA but We woke up at 4 in the morning to catch the three hour bus ride there. The bus broke down on the way there so they crammed us into another bus that was already packed with people. A 40 person bus doesnt fit 70 people.... But hey.... It was funny. Elder gray even managed to buy a trucker hat off of some homeless guy for 15 pesos also! It was hilarious! But Elder Grass and I were crammed near the back of the bus, standing for a little over three hours. Legs were killing me by the end of the ride, but I managed to have a good time looking at the ruins again. It was nice to be able to speak english with some of the other elders that were with us. 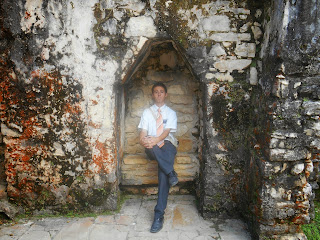 I am doing better, still adjusting, even after five months, but time things are goig well. I am going to be transferred, along with Elder Gray, next monday because the American sisters are finally coming and they want us out of here to house them. So we are leaving. Dont know where, but we know its going to happen. We are both just saying our goodbyes to everyone and the ward is throwing us a Cena Navidad this coming friday to say goodbye to us all... its kinda sad because I love the ward, but I cant do anyting about it. Oh well.
I dont really need anything new... but just send me pictures and letters... I dont need food, and if i do, then I will let you know, but right now... Im good. Glad to hear that everyone is staying busy! Seems that the christmas spirit is coming in... sucks that there isnt any snow here though. Its always hot. emphasis on always... Doesnt really feel like December, but We are doing our best to celebrate.
I LOVE YOU GUYS AND I HOPE YOU ALL HAVE HAD AN AMAZING WEEK. STAY SAFE AND STAY STRONG WITH ALL YOU DO! I COULDNT BE HAPPIER TO HAVE SUCH A STRONG FAMILY AND SUPPORT SYSTEM BACK AT HOME! YOU ALL MEAN THE WORLD TO ME!
Kia Kaha
Elder Proctor
Posted by Elder Alex Proctor at 6:42 PM